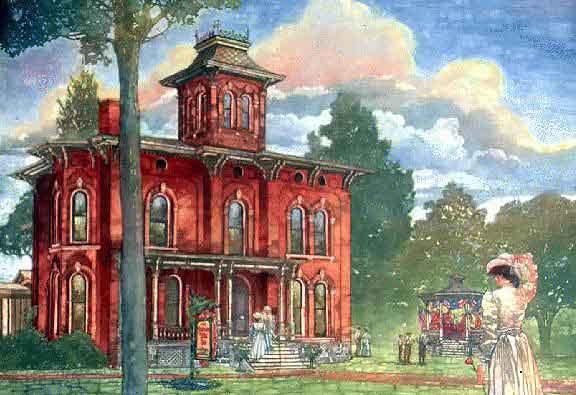 In 1840, as a young doctor from Genesee County, New York, Dr. William P Hurd arrived in Union City, Michigan to join his brothers Theodore & Homer Hurd in medical practice. It was here in 1842 that he met and married Miss Caroline Eliza Hobart, sister to the new Congregationalist Minister, the Reverend Leander Smith Hobart. It is Leander Smith Hobart’s original tombstone that stands just to the east of the Villa’s Carriage House today.

Doc Billie, as Dr. Hurd was affectionately called, was a rural saddle-bag and buggy doctor for almost 25 years until his retirement in the 1860’s under protest to the drafting of field doctors for the War of the Rebellion. In 1865 he founded, was president and chairman of the board of The Union City National Bank located on the south-west corner of Broadway and Ellen Streets where the Southern Michigan Bank and Trust stands today.

In 1869, Dr. Hurd purchased the land at the corner of Broadway and Barry Street and began to set about planning his retirement and suburban estate home. Dr. Hurd contracted with the Covey family members Hanson & Ransom to complete all of the interior detailing and woodwork. The Covey’s began felling and slab-cutting local walnut trees, which they stored on the second floor of their barn south of town. Construction on the home began in the spring of 1872 and was completed before the fall of 1876 when the Hurd’s sold their rural residence on M-60 east and moved into their new villa.

The Gibson’s purchased the home in 1978 and immediately set about the complete and correct restoration of the by-now dilapidated mansion. In 1978 the once brilliant mansion had become a low-income apartment house with seven different units including sleeping rooms, apartments, a music lesson studio, and a chiropractors office.

The Villa has now been completely restored to its original glory and retrofitted with ten authentically detailed bedchambers and suites; seven in the main house and three in the carriage house. Opening in January 1982, The Victorian Villa was only the third Bed and Breakfast Inn in Michigan and the sixth Inn in the Midwest. The Victorian Villa has since gained recognition as one of the most beautiful Victorian Inns in America.

We hope you will join us for your next get-a-way, retreat, adventure, or for your wedding day.  Feel free to e-mail us Contact Us or contact us (517) 741-7383 for your complete get-a-way full-color brochure packet.